Gundam Girls Generation (GGG) is a three-dimensional version of the successive female characters of the Gundam series on a scale of approximately 1/8. This time, a new type girl “Lalah Sune” will appear as a pre-colored finished product from the first series “Mobile Suit Gundam”. Her costume reproduces the same one-piece dress as in the play with yellow clear molding and gradation coloring. From the pedestal that imitates the mobile armor exclusively for Lalah, a blue-green clear molding and gradation effect that imaged the aura rises, and Lalah itself is three-dimensionalized in a sitting pose in a zero gravity space. The hem and sleeves of her one-piece dress also reproduce the spread in a zero gravity space, and together with the effect of clear material, create a new type girl’s wonder. She has outstanding newtype ability and is an eternal woman Lalah loved by Amuro and Char. Her expression on her face seems to be smiling gently, and she looks lonely somewhere … She has a fascinating look that draws in the viewer. 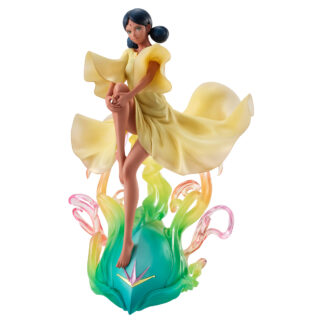