The One:12 Collective Black Bolt is outfitted in an energy-harnessing suit capable of controlling his destructive power. The energy he harnesses can be turned into powerful blasts of concussive force. The antenna on Black Bolt’s head allows him to channel his power inward to increase his strength, stamina, and speed. Complete with 2 head portraits, the King of the Inhumans comes with a devastating sonic scream FX that can be displayed using the included post.

Lockjaw, the loyal protector of the Inhuman Royal Family, features a light-up function that illuminates the antenna on his head. Using Kree technology, the antenna enhances Lockjaw’s teleportation radius.

Exposed to Terrigen mists before birth, Black Bolt obtained a dangerously loud voice that causes massive damage with even a whisper. Reigning in silence, the King of the Inhumans can level cities with a single word due to his sonic powers.

Lockjaw, faithful and fuzzy companion to Black Bolt, gained the ability to teleport across time and space after being exposed to Terrigen mist. With super-canine strength and telekinetic abilities, Lockjaw is an indispensable part of the Inhuman world. 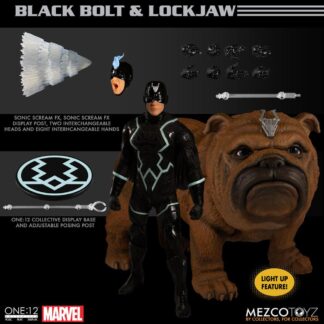