Prime 1 Studio is proud to present the latest addition to our Legacy Museum Collection, 1:6 Scale LMCJW-05 Stygimoloch from Jurassic World: Fallen Kingdom. Stygimoloch is from the family of dinosaurs known as Pachycephalosaurs. These dinosaurs are famous for having a large, bony dome atop their skull; Often used for fighting and expressing dominance, the Stygimoloch is rare as he has deadly spikes protruding out of his to prevent predators from trying to bite it’s neck!

Here we have displayed Stiggy busting through a brick wall. We have taken inspiration from the iconic scene in Jurassic World: Fallen Kingdom in which the Stygimoloch inadvertently frees Owen and Claire from their cells in Lockwood Manor during the auction.

We have implemented the upmost attention to detail in Stiggy’s design. We made sure to nail it’s head-to-body proportions and intricate markings on its face and body. Stiggy’s greatest feature, it’s dome shaped skull pokes out, ready to crash into anything it has to. We are pleased to bring you the most film accurate Stygimoloch on the market, a must-have for Jurassic World fans everywhere! 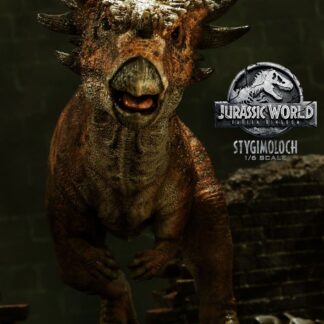