‘I am Isildur’s heir. Fight for me and I will hold your oaths fulfilled! What say you!” – Aragorn

Prime 1 Studio is proud to present the latest addition to the Premium Masterline Series. 1:4 Scale P1SPMLOTR03DX Aragorn Deluxe Version from the epic fantasy adventure film series: The Lord of The Rings

This attention-grabbing statue features one of the main protagonists, Aragorn: the heir of Isildur, leading the Army of the Dead into battle during the War of the Ring. Directly inspired by the awesome scene from Return of The King, Aragorn is charging forward, proudly wielding Anduril high and ready to slay some Orcs!

Charging along with him are the Oathbreakers, those who were cursed by Isildur after they abandoned their oath to aid him during the War of the Last Alliance. Only answering to an Heir of Isuldur, it was not until now, that Aragorn has called upon them to fulfill their oath and break this curse!

Aragorn and the King of the Dead lead the assault! From top to bottom we have put the upmost attention to detail in this masterpiece. The glorious Evenstar jewel hangs around the neck of the most film accurate Viggo Mortensen likeness on the market. This Deluxe version will feature two (2) extra portraits to display a variety of expressions. Aragorn’s sword: Anduril has been perfectly crafted and even features the ancient inscription. We have added a translucent resin effect on the Army of The Dead to create the ghostly feel of the army. We have brought all these elements together to bring one of the most breathtaking scenes in the entire The Lord of The Rings Trilogy to your collection! More than a must-have for fans and collectors everywhere! 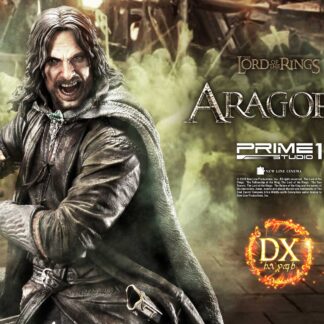