Lord Darkseid, once known as Uxas, is an ancient cosmic God, warlord and conqueror. Darkseid controls the extra-dimensional planet of Apokolips but he yearns to rule Earth and the Multiverse. He is one of the most powerful supervillains in all of existence. Darkseid’s tyrannical goal has made him the Justice League’s greatest enemy. For thousands of years, Darkseid has been searching for the Anti-Life Equation, a mathematical formula that eradicates free will and what would subsequently make Darkseid rule the Multiverse. During a mission on Earth, Steppenwolf, Darkseid’s material uncle, learned the location of the Anti-Life Equation. But what will happen once his uncle findS out its position?

Queen Studios first announced this 1/4 scale Darkseid statue prototype at June 2021’s Wonder Festival. Since then, the team has made incredible progress resulting in this incredible quarter scale statue. The Lord of Apokolips has just witnessed the killing of Steppenwolf. His uncle’s head has passed through a portal to Earth, and he now stands on the head of his slain uncle. In his left hand he is wielding his staff and facing forward glazing at the Justice League through the doorway to Earth.

This 1/4 scale Darkseid statue captures ‘The Great One’ moments after the Justice League murdered his uncle Steppenwolf. The statue is crafted of polystone and has been painted and textured with incredible detail. The floor where Steppenwolf’s head sits is of a dulled metallic grey color and underneath there are layers of cold and ridged plates mimicking Darkseid’s brutal armor. The dark eeriness of Darkseid’s posture coupled with the vivid scarlet blood of Steppenwolf’s severed head is perfect for the more menacing DCEU fans. 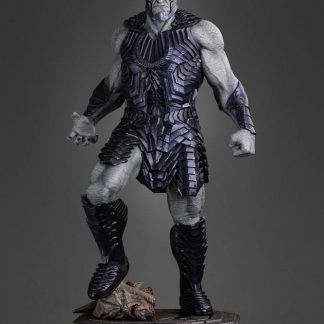