The mighty Kraken is a giant and fearsome sea monster sent by the gods to destroy mortals that have defied them. Perhaps Ray Harryhausen’s greatest achievement in stop-motion animation, the Kraken is a huge four-armed creature with a long tail and terrifying face.

The Super Vinyl statue of Ray Harryhausen’s Kraken is the largest creation Star Ace has ever made. Standing 35 cm tall and extending out a full 54 cm in length, this impressive monster will be an amazing display piece for any collection. Traditionally sculpted by the artisans of the famed creature shop of Kaibutsuya, the statue is made from soft vinyl and is hand-painted to bring out the details of the sculpt.

The deluxe version of the Kraken comes with a polyresin diorama base with sculpted ocean waves and a manacled princess waiting to be rescued. This extended version measures a full 64 cm in length with the base.

Deluxe version is LIMITED EDITION for 1000 pcs ONLY. 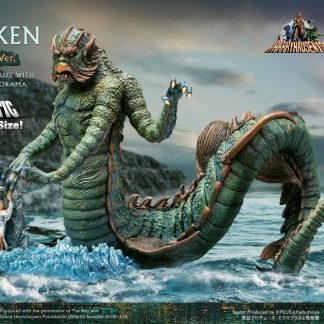